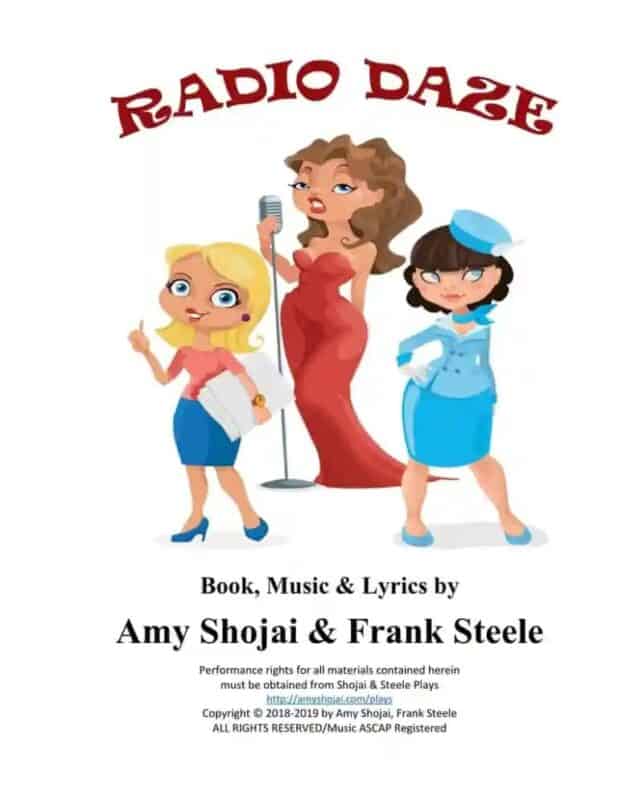 A motley crew of staff, has-been movie stars, and strangers off the street come together to try and save the radio station--and fail miserably to hilarious effect.

Radio Daze, the 1940s Musical, debuted February 7-8-9, 2019 at The Rialto Theater under the direction of Frank Steele and Amy Shojai.

RADIO DAZE (6W/6M) is a funny and often touching homage to the late 1940s. The story unfolds in the failing WPDQ radio station. The owner, Bob Hope (the one from Schenectady) is ready to cut his losses and sell out to the latest fad–television. A motley crew of staff, has-been movie stars, and strangers off the street come together to try and save the station–and fail miserably to hilarious effect. Cast with 6M/6W, RADIO DAZE is the perfect date night or family-friendly-evening-out event. The two-hour show will leave you laughing, humming catchy tunes, and hugging your loved ones close.

RADIO DAZE is an ensemble show appropriate for any age performer, from high school to professional venues. Characters include station owner BOB HOPE (the one from Schenectady), his love-sick assistant WILADINE, the director IRVING, grumpy news guy BENNY, and girl Friday, DOTTIE. Bob hires his niece PEARL to write a script. Irving hires sound effects guy ROB, salesman SNAZZY to sell ads, and has-been talents BARRY, his ex-wife DIZZY, and the PEPPER SISTERS (all played by the same actress) to perform. Meanwhile, the mysterious stranger ROSIE hides secrets that could change the station forever.

Below are songs from the premier performance, including a video trailer from the same performance.

All characters have featured solos and/or ensemble numbers. There are opportunities for choreographed movement or 1940s-style dance breaks within some songs, but this is not required. Music is predominantly big band styles of the 1940s. Multiple verses offer feature solo line opportunities. Most songs are easy mid-range tenor and alto lines. Company numbers require two- to four-part harmonies, often written as “rounds” or combinations of melody lines. This keeps learning music simple for non-music-readers.

A piano score for rehearsal is available, with show performance using a CD with full orchestration; a rehearsal piano/vocal CD can be provided. Video projections partnered with audio orchestrations enhance several of the songs or set the scene. These are available in the licensing package but are optional.

A unit set may be built–Or, as in the premiere of RADIO DAZE, an open stage set with furniture and area lights may be used. RADIO DAZE premiered February 7, 8, 9, 2019 at The Rialto Theater in Denison, Texas. For licensing information contact shojai-steele-plays @ shojai.com (no spaces) with RADIO DAZE in the subject line.

SUBSCRIBE to stay up to date on Shojai & Steele Plays.

Endorsements
The script is fun, the music is great, and the characters are so believable! You don't want to miss an opportunity to produce Radio Daze! Sooner, rather than later :-)
Book Club Resources
Order Now